Total Square Footage: 51,000
Number of Floors: 3
Date of Construction: 1922
Architectural and Historical Significance: Theme: Community Planning and Development
Level of Significance: Local
Classification: SIGNIFICANT
The structure that has come to be known as the AUTO HOTEL was constructed in 1922 following many small land sale transactions by which A. C. Glassell eventually acquired full interest in the three lots at the southeast corner of Lafayette and Convention. Mr. Glassell apparently foresaw the need for multi-level auto parking at this location although the Heidelberg and King Hotels (201 and 200 Lafayette) were not to be built for several years. The architectural and historical significance of the structure derives from it being the first parking structure in Baton Rouge and the exterior design reflecting industrial architectural design of the period. (Architectural and Historical Survey of Downtown Baton Rouge, Louisiana – July 1984) 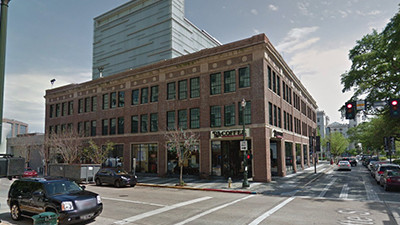