Total Square Footage: 13,000
Number of Floors: 2
Date of Construction: 1926
Architectural and Historical Significance: Theme: Commercial Architecture
Level of Significance: Local
Classification: MAJOR SIGNIFICANCE
The present bank building was built by the Union Bank and Trust Co., whose charter dates from the early 1900's. Earlier owners of the property include F. Capps, Michael Chambers (1892), St. James Lodge, No. 47 (1894), and Joe Gottlieb (1904). City National Bank acquired the property in 1937, after the present building had been built, in two separate chains of acquisition.

The succession of ownership of the bank property fronting on North Boulevard (Lot 6) dates from 1867 (COB 11 v, 11 p. 541). The Brunot family owned this property prior to 1916 (COB 61, p. 194). The date of construction of the Fraternal Order of Eagles Building fronting on North Boulevard (Lot 6) is unclear, however, City National Bank acquired rights to join the two buildings together by a Lease Agreement and to erect a new building on March 14, 1946 (COB 649, pp. 19, 23, 414, 717). The connecting structure was built in 1947 or 1948. The building is of major significance as the oldest remaining banking institution in the downtown area. Architecturally the significance of the building is modest in a stylistic sense. The Riverside Mall facade is suggestive of the Renaissance Revival style, and although it is not a particularly pure treatment of the style, the facade is imposing none the less. (Architectural and Historical Survey of Downtown Baton Rouge, Louisiana – July 1984) 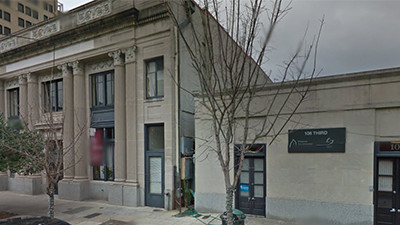