The Grand Lady, located at 310 Convention Street, was recently purchased by Mark and Debbie Hudson. One of the last Victorian homes in Downtown Baton Rouge, The Grand Lady was built in 1905 and it is currently being renovated back to its original architectural glory by Chenevert Architects. Preservation of the historical details of the house, including 12-foot ceilings and fireplaces, are a priority of this restoration effort. The initial phase includes renovating the home to include 7 apartments and the second phase will include 6 additional apartments in the rear of the home surrounding a New Orleans-style courtyard.

Total Square Footage: 5,400
Number of Floors: 2
Date of Construction: 1910
Architectural and Historical Significance: Theme: Residential Architecture
Level of Significance: Local
Classification: MAJOR SIGNIFICANCE
Known as the Fridge Residence prior to renovations in 2015, this is the only remaining turn of the century residence of its type in the downtown area. Dr.John R. Fridge acquired the property in 1902 from Mrs. Mary A. Huget, widow of William S. Pike, Sr. Tax assessments between 1902 and 1910 show minor assessments but never reflecting the value of the present structure. Perhaps this is because Dr. Fridge had a small structure on the property previously or the present house was constructed in stages. From a personal account by Dr. Rhett McMahon, Jr., the house had five bedrooms, three bathrooms, and four sleeping porches. The downstairs contained a parlour, living room, butler's pantry and storage room. Downstairs, on the west side, was the entrance to Dr. Fridge's office. It consisted of a hall and two waiting rooms, a full bath and a half bath at the end of the hall, and an examining room. Because of historic associations with significant personages, age,uniqueness as a significant remaining residence in the downtown, and architectural character, the structure is considered to have major significance.
(Architectural and Historical Survey of Downtown Baton Rouge, Louisiana – July 1984) 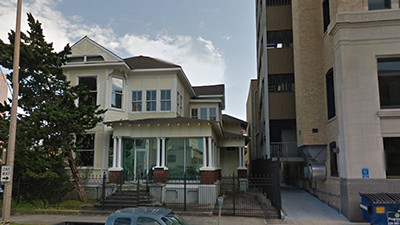