Total Square Footage: 20,000
Number of Floors: 2
Date of Construction: 1924
Architectural and Historical Significance: Theme: Community Development and Public Architecture
Level of Significance: Local
Classification: MAJOR SIGNIFICANCE
The history of organized fire-fighting in Baton Rouge dates to 1825 when a bucket brigade was organized, according to Mark T. Carleton in BATON ROUGE. By 1891 the Baton Rouge Fire Department consisted of six organized companies containing 350 volunteer members. Old Bogan Central Station has been used as a stable for Washington #1 Firehouse located on Fourth Street as well as the central fire station. The hose drying tower still standsat the rear of the property and was not renovated as part of the recent work. Historically the building is of valid significance. Architecturally the original Art Moderne styling and recent renovation for the Arts and Humanities Council has left a building of major significance.
Because of an unfortunate contemporary facade remodeling, the building has no architectural significance. It is historically significant due to its historical use as Washington Fire Station #1 and as the Mayor's office. It also is believed to have housed the first public library in Baton Rouge.
(Architectural and Historical Survey of Downtown Baton Rouge, Louisiana – July 1984) 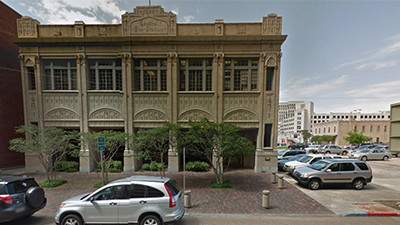