Total Square Footage: 44,000
Number of Floors: 1
Date of Construction: 1853-1856
Architectural and Historical Significance: Theme: Religious Architecture
Level of Significance: Local
Classification: MAJOR SIGNIFICANCE
The land on which St. Joseph's Cathedral is now built was acquired from Don Antonio de Gras, one of Baton Rouge's earliest settlers, and from William S. Pike, noted banker, merchant, and entrepreneur. The Roman Catholic cathedral originated in the 1790's and was chartered by the legislature in 1820. The new sanctuary was begun in 1830 and was designed by Father John Cambiazo. When completed the sanctuary seated 400 persons, and the church property was worth $12,000 making it the wealthiest denomination in Buton Rouge. The church suffered damage in ~he Civil War from bombardment by a Union gunboat. The present cathedral, in a Gothic idiom of Victorian style, is th~ oldest church in Baton Rouge and is of major historical and architectural significance.
(Architectural and Historical Survey of Downtown Baton Rouge, Louisiana – July 1984) 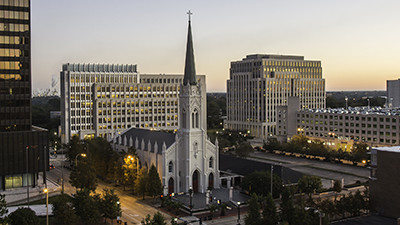