The national competition recognizes mayors and their city governments for developing programs that enhance the quality of life in urban areas.

Mayor Holden noted that the $7-million North Boulevard Town Square has quickly established itself as the social and cultural heart of Baton Rouge in the two months since it officially opened.

"This project has taken our downtown to the next level among American cities," said Mayor Holden, "and that increases our ability to attract visitors and new businesses to keep our local economy strong. The new Town Square also provides a quality of life and space for programs that we hear over and over are important to the people of East Baton Rouge Parish."

The project was funded using a combination of City-Parish funds, state sales tax rebates and money from the Federal Transit Authority.

The North Boulevard Town Square project created an acre of open green space in the heart of downtown by reconfiguring several streets near the historic Old State Capital and the new 19th JDC Courthouse. The Town Square includes two stages for concerts, a fountain, tables and chairs, a covered bus stop and a media tower with a high-definition screen.

The $2-million second phase of the Town Square project is slated to begin later this year to extend the park east along the North Boulevard median from Fourth Street to Fifth Street, and as far west as River Road.

Every municipality in the United States was eligible to nominate one or more city government programs in any policy area to be considered for this year's City Livability Awards. Any programs initiated by the city government were eligible, including those developed and implemented in conjunction with private sector or community groups.

"From exercise classes to musical programming events, it has become the premier outdoor urban space for the public to enjoy, Rhorer added. " We are thrilled with the success of this space and are humbled by the many awards the project has received."

The Town Square project has already been recognized by the American Society of Landscape Architects, Baton Rouge Growth Coalition and the International Downtown Association, Rhorer said.

Rhorer noted that the Square was originally recommended in the Riverfront Master Plan and has been adopted by Plan Baton Rouge ll and the FutureBR Master Plan for East Baton Rouge Parish. 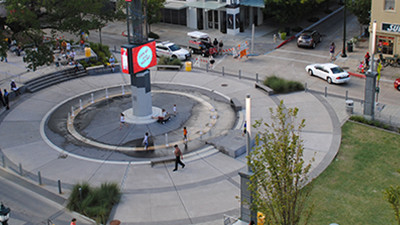