DIVERSITY OF DEVELOPMENT ON 3RD ST

These days downtown Baton Rouge is much more than a "field of dreams." New retailers and developments along Third Street are bringing more residents downtown than ever before-fulfilling a long-term vision for the city's center that's been in the works for more than two decades.

Featuring many of the city's best restaurants, music venues, and bars, Third Street is already thriving with nightlife and entertainment options. But new investments in residential developments and essential services, such as a grocery store and a pharmacy, are helping to make downtown more livable. Click to view a map illustrating the dynamic tenant mix of Third Street.

"This is a game-changer," said Davis Rhorer, executive director of the Downtown Development District referring to the $22 million redevelopment of the Commerce Building on Third Street, which is expected to bring more than 100 new residents downtown.

After sitting vacant for three years, the eight-story 180,000-square-foot black building on the corner of Third and Laurel is getting a major facelift. And when it is complete, the Commerce Building will feature 92 residential loft-style apartments and 15,000 sq. ft of retail space on the ground floor and the rooftop.

"The goal is to have a variety of desirable spaces that are attractive and affordable for young professionals."

Developers are also hoping to bring two appealing commercial tenants to the building. Lang said the 5,000 sq. ft. of retail space on the rooftop, which features panoramic views of the Mississippi River, would be perfect for a design driven restaurant concept. Meanwhile, a grocery store is at the top of the "wish list" for the 7,500 sq. ft. ground floor space.

"We are pursuing a retailer that is service based to meet the growing needs of our tenants and the broader downtown community," Lang said. "Ideally we'd love a grocer that could offer daily lunch specials and a selection of essential grocery items."

Lang said, TJ Iarocci, who purchased the building for $1.3 million on behalf of a New Orleans-based group of private investors, had been looking for an investment opportunity in downtown Baton Rouge for a while.

Lang said construction will begin later this year and the building is set to open in 2014. Potential retailers and residents interested in pre-leasing information should visit thecommercebldg.com to sign up for email updates.

If the Commerce Building can snag a local grocer, it will be another welcome addition to the neighborhood. Amenities can currently be accessed from Capitol Grocery, Catfish Town Chevron, and Capital Corner Market, but with the much anticipated opening of the new Downtown Grocery on the corner of Third Street and Florida Boulevard in April, downtown living is becoming much more convenient and practical for residents.

Owners Michael Matroodnejad and Mutaz Abusada, who also own Summit Grocery in Denham Springs, are excited about their new downtown location.

"We think it is one of the fastest growing parts of Baton Rouge, and that's why we want to be down there," Matroodnejad said. "When we started considering plans to open our second location, we looked at Gonzales, Juban Road in Denham springs and Highland Road. Ultimately we decided to go downtown because we see so much potential and so much interest."

Indeed, there is significant interest. A survey conducted by the DDD last year of more than 1,000 people who live and work in the downtown area found overwhelming support for a neighborhood grocery.

Matroodnejad is hoping to tap into that strong demand by offering more than 2,000 products in the store including fresh baked goods and fruits and vegetables from local farmers' markets.

"This is not a convenience store," Matroodnejad stressed. "This is a grocery store. We'll have all the essentials, from canned goods, to toothbrushes, to wine and barbecue sauce. We'll have it all."

The Downtown Grocery will also feature a huge selection of Community Coffee, and Matroodnejad says they are working with lots of other Baton Rouge-based vendors to offer as many local products as possible. 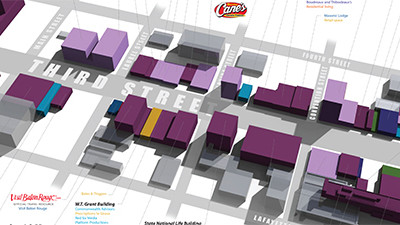