BATON ROUGE, La. - Today, Gov. Bobby Jindal and IBM Senior Vice President Colleen Arnold joined other leaders to break ground on the $55 million urban development in downtown Baton Rouge that will be home to the new IBM Services Center: Baton Rouge upon its completion in mid-2015. The project will create 800 new direct jobs, and LED estimates the project will result in an additional 542 new indirect jobs, for a total of more than 1,300 new permanent jobs in the Capital Region of Louisiana.

The IBM technology center has already been operating at its temporary space in an Essen Lane office in Baton Rouge and employs more than 100 people. The company's Baton Rouge operation develops software applications and other business solutions for domestic customers, and IBM represents the single, largest software development project attracted to Louisiana in what is becoming a rapidly expanding sector for the state. Digital media and software development investments by GE Capital, EA, Gameloft and others have been accompanied by major corporate headquarters expansions by CenturyLink and Schumacher Group in the software technology sector.

Gov. Jindal said, "Today represents a landmark event in the history of Louisiana, Baton Rouge and the Capital Region. This historic new technology center operated by IBM will pioneer new innovation and software development right here in Baton Rouge. The IBM Services Center will create quality technology career opportunities, allowing us to retain our best and brightest students here at home while also further growing our economy. IBM joins a long list of technology companies that have expanded or established offices in Louisiana since 2008, all of which are collectively on track to create more than 3,200 new direct jobs and thousands more indirect jobs in Louisiana. These wins are proof that Louisiana's growing economy is quickly becoming a beacon for the digital media and software industries."

The IBM Services Center: Baton Rouge project includes innovative, public-private partnerships to expand higher-education programs related to computer science and to construct a major new riverfront development that will accelerate the revitalization of downtown Baton Rouge. The center will employ a broad range of college graduates and experienced professionals with backgrounds in computer science and other quantitative-intense fields, such as engineering, mathematics and science.

The Baton Rouge center will provide IBM clients in the United States with solutions that address the increasing demand for flexible software services to keep up with Big Data cloud and mobile requirements that they are facing. IBM Services Center: Baton Rouge will deliver technology services that include application development, application management and system integration.

"This is a great day for the City of Baton Rouge," said Mayor-President Melvin "Kip" Holden of Baton Rouge and East Baton Rouge Parish. "We are thrilled to see IBM - and the regional partners working with them to make the services center a reality - take another step forward. This groundbreaking event is a reminder of the great things happening in our city and we thank IBM for being part of this push to make our city even better."

For the IBM project, the State of Louisiana will provide $14 million over 10 years to expand higher-education programs designed primarily to increase the number of annual computer science graduates. At least 65 percent of those funds will be provided for expansion of the Computer Science Division of the School of Electrical Engineering and Computer Science at LSU.

"LSU is excited to work with Louisiana Economic Development and IBM on a partnership that is bringing new educational and job opportunities to our state," said LSU President and Chancellor F. King Alexander. "LSU is committed to having a top computer science program, and welcomes students to take advantage of the opportunities offered through the Geaux Digital partnership and the LSU College of Engineering."

The approximately $30.5 million office building will be constructed with public funds, whereas CPRT, which estimates 600 construction jobs will be created by the overall project, will secure private financing for the residential building that will be completed in 2016. Bounded by Lafayette Street on the east, River Road on the west, Main Street on the south and North Street on the north, the development site is at the former location of The Advocate newspaper.

"We thank the state, city and the Manship family for partnering with us to bring IBM to Baton Rouge," said President and CEO John Davies of the Baton Rouge Area Foundation. "With this project, Baton Rouge begins a return to its riverfront, and downtown gets nearly 100 places for people to live - the final element of a revival plan that began 15 years ago."

"BRAC applauds IBM for the advances they have already made to date to establish their Baton Rouge services center," said President and CEO Adam Knapp of the Baton Rouge Area Chamber. "Having over one hundred jobs already in place shows how serious they are about growth, and is a positive early sign about the quality of our software talent. Today's groundbreaking is an important moment in the history of the region's economy."

IBM Services Center: Baton Rouge joins IBM's globally integrated capability network, which delivers deep technical and industry expertise. It is the latest in a series of job-creating investments IBM has made this year in high-tech, science and innovation in support of the global competitiveness of U.S. workers. This builds upon IBM's efforts to build technology skills for primary and secondary school students through its Young Explorers and P-TECH programs, as well as to train college students for high-tech jobs in local markets.

Additional details about IBM's Baton Rouge project and its future hiring plans for the IBM Services Center: Baton Rouge may be found at www.ibmlouisiana.com/jobs. In an open-bidding process, CPRT selected The Lemoine Company as the general contractor for the construction project.

IBM is a globally integrated technology and consulting company headquartered in Armonk, N.Y. With operations in more than 170 countries, IBM attracts and retains some of the world's most talented people to help solve problems and provide an edge for businesses, governments and nonprofits. Innovation is at the core of IBM's strategy. For more about IBM, visit www.ibm.com.

"The IBM announcement has amplified the downtown development stage, adding to the over 20 active downtown projects, returning another riverfront property to commerce, and standing testament to the renaissance occuring downtown." - Davis Rhorer 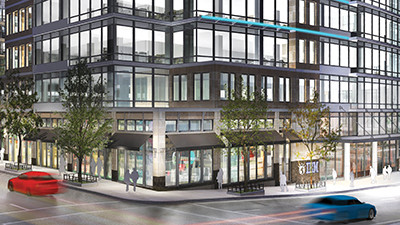