Share:
Downtown Baton Rouge workers and residents can now fill prescriptions without driving to another part of town, with the opening of Prescriptions to Geaux on Friday. Civic leaders at a ribbon-cutting ceremony said the opening of a pharmacy is an important step in making downtown an attractive place for people to live.

A pharmacy was considered one of the key businesses, along with a full-service grocery store, that downtown Baton Rouge needs to help spur more residential development. The store, at 313 Third Street, will offer bicycle delivery to downtown residents and businesses.

“This is what we need to make 24-hour-a-day living here (in downtown) the thing to do,” said the new pharmacy’s landlord, Ben Taylor III of the Taylor Building Company.

Prescriptions to Geaux owner and pharmacist T.J. Woodard said he decided to open downtown after a friend who worked in the area was bemoaning the lack of a nearby pharmacy.

“I was really intrigued by the fact that there wasn’t already a pharmacist working downtown,” said Woodard, who previously worked as a pharmacist at a local grocery store.

Woodard said the most difficult part of opening up a new business was figuring out all of the regulations he needed to meet. Now that the shop is open, he said he’s looking forward to “just filling prescriptions. This is what I know how to do. The hard part’s over.” 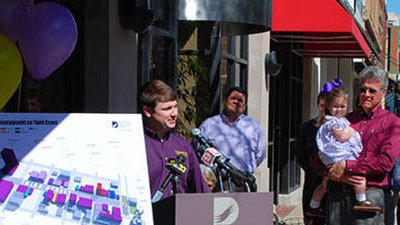