“Windsor Aughtry Company is extremely pleased to have the opportunity to bring a Courtyard Marriott to Downtown Baton Rouge. The vision and support of city leaders have made this a great place to do business. The commitment from the public sector has created a vibrancy and energy that has attracted significant private sector dollars, laying the groundwork for continued growth and success.” - Paul C. (Bo) Aughtry, III, Windsor Aughtry Company Principal

The Downtown Courtyard Marriott’s specific Third Street location pays homage to the Hotel Istrouma, Baton Rouge’s first downtown hotel formerly at the same Third Street location. Designed by Bounds and Gillespie Architects, PLLC., the hotel will include an entry plaza area and will take advantage of downtown’s skyline along Third and Florida, as well as south to LSU, with approximately 35% of the rooms equipped with balconies.

“We at Marriott couldn’t be happier to collaborate with the Windsor Aughtry Company on this exciting new project in the Downtown. This market has continued to steadily grow with the support of the City and we believe that the Courtyard by Marriott brand will provide a great offering for guests visiting the City whether on business or leisure.” – Lee Janezic, Director of Development Marriott International

This is Windsor Aughtry’s second downtown development in three years, bringing their firm’s total investment close to $40 million and downtown above the goal of 1,000 available hotel rooms. In addition, 45 permanent jobs including 125 construction and 30 service related jobs are expected as part of this development.

“This exciting announcement puts Baton Rouge over 1,000 hotel rooms within walking distance of our River Center, which means we just got even more competitive in hosting conventions and large entertainment events. When you consider in 2001, we had zero hotel rooms downtown, the revitalization we have accomplished in such a short time proves why Baton Rouge is being called the gold standard for downtown development. Today we thank the Windsor Aughtry Company, already a valuable asset to Baton Rouge with its Hampton Inn and Suites Downtown and now an even bigger contributor to our success. This is a project we all look forward to.” – Honorable Mayor-President Melvin “Kip” Holden 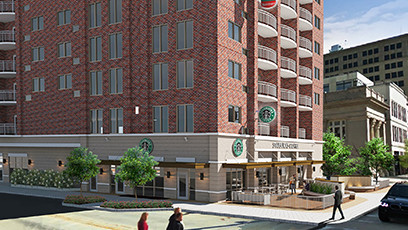