Share:
This has been one marvelous first year for the Crest, hosting over 30 concerts, that is fulfilling the envision that was breathed in the Riverfront Master Plan, Plan Baton Rouge II.

As part of the Riverfront Master Plan, Plan Baton Rouge II, and North Boulevard Town Square, a special-event stage would be created to provide a venue for large events in the heart of downtown. This project furthers implementation of Plan Baton Rouge II building upon the ‘Central Green’ concept - a unified system of greenspaces linking the areas cultural attractions with the City Hall and River Center Campuses.

Hundreds of thousands of people continue to enjoy The Crest since its debut less than a year ago. Over 50 events have been hosted under its simple, symbolic form. Visitors marvel at its multiple perspectives, interact with its reflective covering, and admire it while lounging in Galvez Plaza’s lawn.

The Crest is an engineering and sculptural icon that connects North Boulevard Town Square and the City Hall campus and cultural attractions. The Crest was completed in September 2013 and has since received the following prestigious awards.

The Crest has already received 5 prestigious awards, and serves as an international model in the creation of a civic icon that is a premier concert venue and a daily attraction. 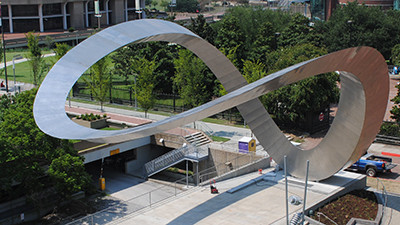