Share:
The Downtown Development District has released the 2016 update to their Development Toolkit - a document offering demographics, statistics, and other resources meant to meet the needs of the development and business community.

The data presented within the document gives a current snapshot into the downtown economy as a whole, and indicates a continued strong positive direction for downtown in all areas. With 41 active projects and over $2 billion total invested, the data shows that initial public investments have returned a much higher private investment total over the last five years.

The Toolkit shows that downtown property values continue to increase, and demand for office and residential has increased recent sales prices as investors respond to the attractiveness of downtown. Over the last four years, the total number of construction related permits as reported by the EBR Permit and Inspection Department is over 400; evidence of the continual investments being made within the downtown area.

Commercial activity and taxable sales continue to increase due in large part to the 140,000 daily visitors to downtown. Downtown is now home to almost 27,000 jobs and 642 businesses.

Downtown also shows a steady increase in occupancy rates for both Class A and B markets. Demand for open, efficient floor plans is high, though supply remains low. There are currently minimal options for large blocks of space (10,000 +SF) and the lack of available Class A space has sparked downtown development projects such as IBM, 500 Laurel, and the Water Campus.

Downtown living is still on the upswing with 454 units currently under construction or in planning. $122.8 million has been invested in residential development since 2010.

The Toolkit also features a demographic summary of downtown residents and workers, and provides information about the DDD office, economic incentives, maps such as land-use and daily population inflow/outflow, and a section that walks you through the steps for obtaining planning commission approval and required City/Parish permits.

Also found within the Toolkit document is detailed information on downtown tourism, the hotel market, and the Baton Rouge River Center. The 1,000 events and nine major attractions bring over 1.5 million tourist into the downtown area on an annual basis, creating a perfect synergistic relationship with downtown businesses. Downtown will soon have seven hotels within walking distance to the River Center, and now captures 9% of the total number of rooms within the Metropolitan Statistical Area at 1188. 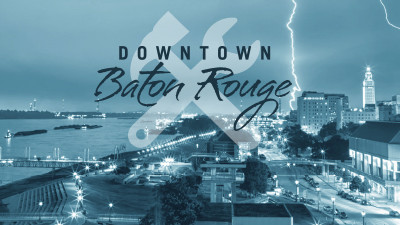