In the wake of the pandemic, the momentum of downtown continues to hold steady. A steady stream of new private project announcements and supporting DDD initiatives are holding the pace, presenting evidence of sustained progress. With over 50 projects on the horizon in 2021, we continue to forge ahead, responding to the present needs of the downtown business, development, and residential communities.

Highlighted below are some of the exciting developments currently underway or in planning for 2021.

The areas on the south side of downtown, particularly at the Water Campus, are seeing a renaissance of activity. Work continues at 200 Water Street, which will bring 20 residential lofts to the Water Campus. Coupled with housing units in development at the River House, the campus and area will offer 286 total residential units. Connecting the new residents and office workers to the downtown core through improved pathways and wayfinding signage will be a top priority for this year. Baton Rouge attorney, Spencer Calahan’s new five-story downtown office complex at the corner of South Boulevard and St. Louis has also contributed to the overall progress in the area.

Wampold Companies is currently planning to renovate the Chase South Tower into commercial offices and residential apartments. The building, which is very prominent on the downtown skyline, will offer 4,000 square feet of ground floor retail space, 144 residential units, and an 8,000 square foot pool area on the penthouse level.

Main Street is seeing some excited activity with the Louisiana Association of Business and Industry (LABI) new headquarters at Fifth and Main Streets, and the Louisiana Board of REALTORS® development of a new office space at Main and 9th Streets.

The new home of the Arts Council of Greater Baton Rouge (pictured above) is currently underway on St. Ferdinand Street. The building will include a community art space, recording studio, rehearsal spaces, artist workshops and gallery. This development gains from its proximity to the new River Center Branch Library, and other cultural developments like the River Center Theatre renovation, and the recent announcement of the relocation of the new Baton Rouge African American History Museum to 805 St. Louis Street.

Downtown’s churches also continue to expand and renovate. During the COVID 19 lock down of 2020, St. James Episcopal moved forward with plans to renovate and upgrade major components of the church on 4th Street, First United Methodist recently completed a $3.5 million renovation to their sanctuary, and street and landscape improvements at First Presbyterian Church are currently underway.

Hollywood Casino has plans to begin construction on their new landside casino in early 2021. The casino looks to spend between $21 million and $25 million to expand its existing pavilion, and an additional 42,000 square feet for a total of over 100,000 square feet. Exciting possibilities for further development exist at the River Park site as well, with the site currently on the market. Viking Cruise Lines continue planning for their arrival in 2022, and Shamrock Marine continues expansion of their docking facilities with the recent opening of its new headquarters just upriver from the I-10 bridge on the Mississippi River.

Third Street investment continues with the recent openings of Rio Tacos and Tequila at 333 Third Street and The Vintage BR, a New Orleans-born restaurant that recently opened on the bottom floor of the Commerce Building. NardFit, a new private gym at 440 on Third, also just opened its doors.

The Downtown East area is experiencing a surge of housing development as Gulf Coast Housing Partnership, the lead developer on the mixed income Elysian I and II residential complexes on Spanish Town Road between 11th Street and 13th Street, continues construction on the 42 unit Elysian III. The 110 unit Valencia Apartments by Gulf Coast Housing Partnership and Lotus Village, a new senior housing development on Spanish Town Road and 14th Street, are also contributing to this surge.

On the opposite side of Downtown East, local investor Anthony Kimble who specializes in Downtown East and Mid City redevelopments, has purchased property on Government and Julia Streets. Kimble purchased property at 1440 Government Street and 1419 Julia Street and plans to build 12 to 14 multifamily housing units on the Julia Street site, which is made up of three lots. The historic Hotel Lincoln, which hosted African-American guests in Baton Rouge during the period of segregation, was also purchased by Anthony Kimble. The 12,000 square-foot building has been abandoned since the 1980s, but the developer plans to convert the building into apartments with a ground floor restaurant.

No river in America is as culturally, historically, and economically significant as the Mississippi. In Baton Rouge, visitors and residents are able to take advantage of the city’s proximity to this famous waterway and partake in a wide variety of activities including biking, walking, sightseeing, and relaxing. Attractions such as the Louisiana Art & Science Museum, USS KIDD, North Boulevard Town Square, Old State Capitol, and the Raising Cane's River Center, are all within sight from one of North America’s most important rivers.

To continue the momentum after recent improvements to the riverfront such as better river access and a sculpture at Florida Street, the renovation of Riverfront Plaza Phase I, and new riverfront wayfinding signage along the levee path, the DDD will focus on further visitor enhancements in 2021.

Construction for Riverfront Plaza Phase II will kick-off in late spring, and will provide additional tree and meadow plantings as well as a new pedestrian crossing at River Road. This project will be complemented by other enhancements near and within the plaza such as a new shade structure and exercise stations.

Gateway Signage to welcome users into the Downtown Area will be installed along the levee bike path at the Mississippi River bridge, and the USS KIDD may finally receive well-deserved spot lighting to highlight its beauty at night when many people frequent the riverfront. Additional Adirondack chairs along the levee path are also planned.

One of the goals of the DDD is to always make getting around Downtown Baton Rouge a breeze, whether you’re on foot (or bike), driving your personal vehicle, hailing a ride or using any of the convenient public transportation lines.

With the recent completion of Phase II of the Downtown Greenway, the DDD is shifting to Phase III, which will start with the implementation of dedicated on-street bike lanes along 5th and 6th Streets, strengthening connections between Beauregard Town, the CBD, and Spanish Town. The new lanes will connect to the greenway at North Boulevard and provide a safe route to the northern parts of downtown. In addition, the DDD has submitted a Transportation Alternatives Program Grant application for Phase IV of the greenway, which plans pathways from Spanish Town Road to Memorial Stadium.

Other connecting pathways and improvements that feed into the greenway include the Louisiana Avenue Connection, which will connect the new Government Street bike lanes into downtown and the greenway via Eddie Robinson Drive and Louisiana Avenue, are also on tap for 2021. These improvements will enhance the bicycle and pedestrian experience with new crossings, wayfinding signage, landscape plantings, and lighting under the I-110 overpass.

These improvements at Louisiana Avenue and Interstate 110 are also meant to break down the barrier created by the interstate system between Beauregard Town and Downtown East. To further this strategy and to encourage better use of the free parking areas under the interstate system, the DDD will begin installing security lighting, new striping, and gateway lighting to activate the underutilized parking areas, and provide additional safe and free parking areas for downtown daily workers and event goers.

As implementation of the Downtown Greenway continues, the DDD will work to connect the greenway with planned bicycle and pedestrian improvements along River Road. New sidewalks and tree plantings will be installed later in the year between Convention Street and North Street, and the existing multi-use path will be extended north to River Palms and Riverview Condominiums.

Over several years, DDD has worked to connect numerous civic and cultural institutions near the River Center and City Hall campuses through a unified system of greenspaces known collectively as the Central Green. In total, the Central Green boasts over 11 acres of accessible, contiguous public greenspace. The Central Green has become a premier regional destination, hosting hundreds of annual events on the lush greenspaces, ranging from large concert series that attract thousands of attendees to small informal gatherings

Many projects to enhance the Central Green are in the works for 2021 including the renovation of the MLK Sculpture, greater utilization of the library media screen for programming, and improvements to the transit components such as real-time CATS arrival displays and updated transit maps. In addition, renovation and repairs to site furniture and other features are in the works.

The DDD will continue supporting and coordinating numerous downtown public projects such as the River Center Theatre renovation; adding landscape enhancements to the plaza area and collaborating on the placement, orientation, and lighting of Mestrovic sculpture to create a truly special Mestrovic Court.

Also of importance in 2021 is assuring that pedestrian improvements along Nicholson Drive as part of a roadway transfer project between DOTD and the City-Parish properly connects to existing facilities in the downtown area near South Boulevard to ensure optimal connections between Old South Baton Rouge, LSU, and the core of downtown. Plans for Bus Rapid Transit further the need for complete pedestrian and bicycle connections.

We will continue to push for adequate public drop-off areas near City Hall and the courthouses, while continuing efforts for a Police Memorial to be built at the former Municipal Building site.

Baton Rouge has about 1,800 on-street public parking spaces downtown and another 2,700 private parking spaces, but is not currently collecting their expected revenue. Consultants have recommended hiring a parking management company to oversee the ticketing, operations, and management of a comprehensive parking program downtown, and upgrading the city’s outdated parking meters with modern machines that accepted credit card and phone payments. Implementation of the new meters and parking kiosks is expected in 2021.

LOOKING FORWARD TO AN EXCITING 2021

The DDD will continue to implement Plan Baton Rouge II and other master plans, while supporting initiatives that make downtown the city’s premiere place to live, work, and play. We thank the entire community for their unwavering support as our team works to initiate, incubate, and support partnerships that develop and enhance the District. 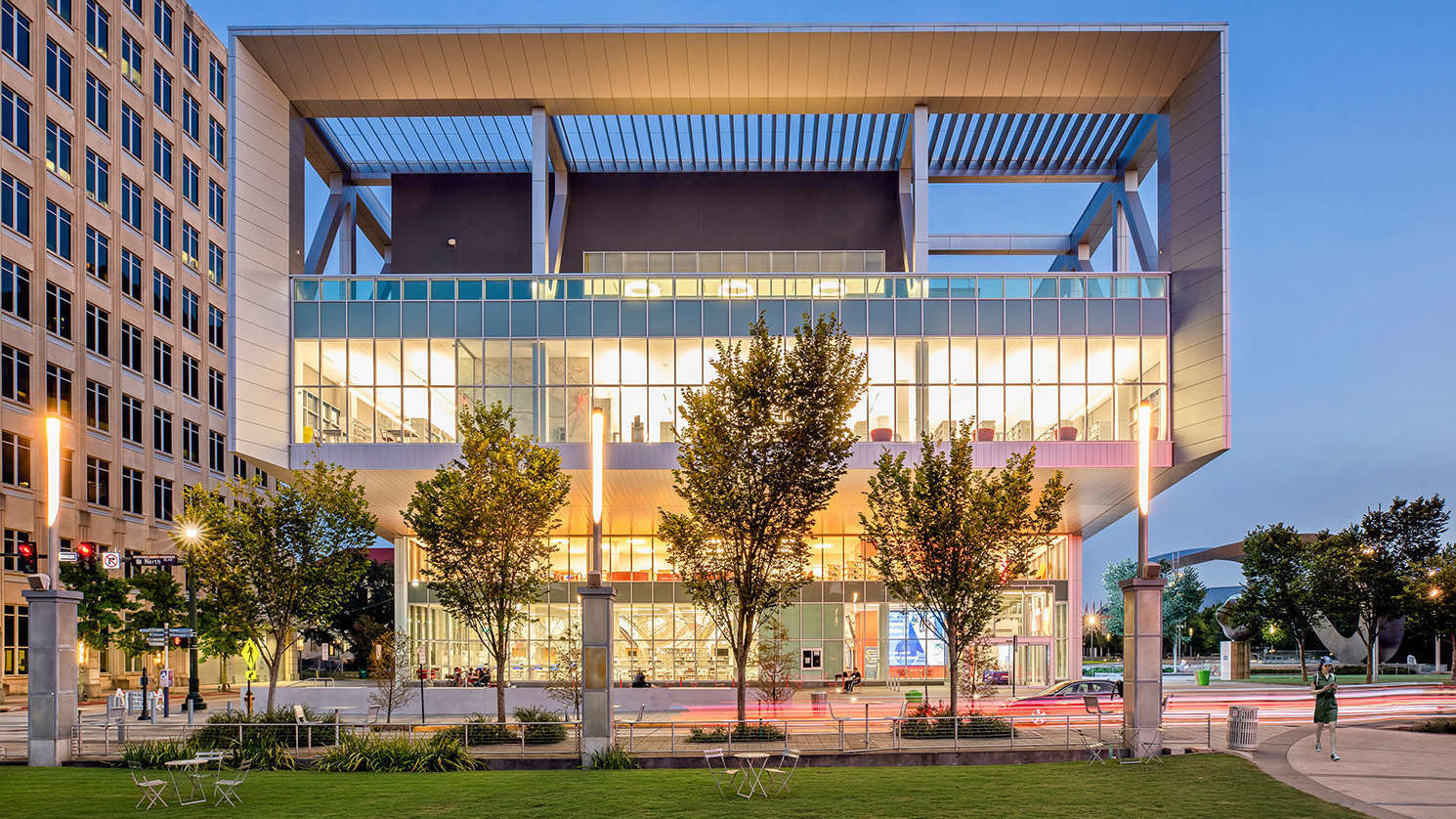