Bandleader Sam Irwin, a Melrose Place resident of Baton Rouge, has been exploring the music created by the jazz musicians of New Orleans.

“A lot of the great musicians who invented jazz were from New Orleans, like Louis Armstrong and Jelly Roll Morton,” Irwin said. “But others came from the small towns along the Mississippi River, like Kid Ory of LaPlace, Joe “King” Oliver of Donaldsonville, John Robichaux of Thibodaux, Illinois Jacquet of Broussard, and Clarence Williams of Plaquemine. Jelly Roll Morton actually took his name from his Mouton stepfather and anglicized it. If you read up on early jazz, you’ll find a lot of French, Cajun and Creole names sprinkled about so there’s a lot of French Louisiana in jazz.”

Irwin, a former music major at the University of Southwestern Louisiana (now University of Louisiana at Lafayette), is the author of “Louisiana Crawfish: A Succulent History of the Cajun Crustacean” and “It Happens In Louisiana: Peculiar Tales, Traditions and Recipes from the Bayou.” He picked his trumpet after a long layoff and started practicing after hearing trumpeter Nicholas Payton perform on Allan Toussaint’s album “The Bright Mississippi.”

“I heard Payton’s playing and it knocked me out,” Irwin said. “I wanted to play like that and I wanted to play that music. So I began practicing again and kept asking people if they wanted to play traditional jazz. Now we’ve got a band and we’re ready to perform.

“The band started in 2015 with a mixture of young and old players, several who live in Melrose Place, including Sam, David Seymour and Terry Byars. We took our name because Florida Street is so close to Melrose. David is a 30-year-old wood wind player from California. Terry Byars is a regular in the local theater scened Drummer Zach Bourque is from Zachary and bassist Philip Vincent is from Baton Rouge. Both of those musicians are in their 20s. Pianist Terry Byars is a veteran musician from Baton Rouge and has played church and Broadway show music for many years. We’re all rediscovering the music of New Orleans.”Then There’s John Dupaquier, an 89-year-old musician Sam met at the Baton Rouge Music Club’s fund-raising auction. “John was playing banjo in a little warm-up combo,” Sam said. “I asked him if he wanted to come play banjo with us and he gave me an old, beat-up card he found in his case. I called him and he has been playing banjo with us for more than a year. He also fills in on piano. He played with Joe Lamendola’s Rampart Street Six and the Last Straws. We love him and he’s a great musician.”

“It’s in that spirit that I wanted to bring traditional jazz to Baton Rouge,” Irwin said. “If the Capital City can’t go to New Orleans, we’ll bring New Orleans to the Capital.”Other musicians who have gigged with the Florida Street Blowhards include the late Jim Kersh, who was a regular in the Baton Rouge Concert Band. Trombone player Thomas McKee is furthering his music career at the University of Miami on his way to an M.A. Brian Breen, a theater musician, composer, conductor and arranger, sometimes fills in on banjo. John Bishop, music professor at the Baton Rouge Community College. 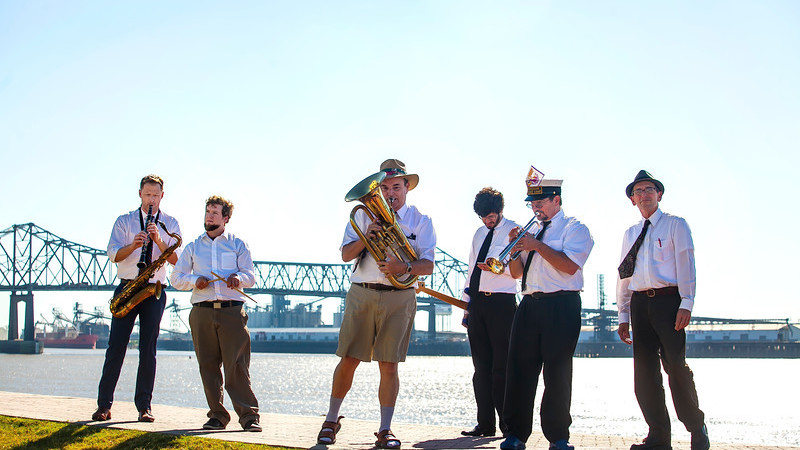