It's time to pull out your hairspray and put on your gaudiest getup as we flashback to the ‘80s. We’re transforming the Manship Theatre spaces into the ‘80s rock party we’ve all dreamed of. Get whacky in Poison’s green room before we rock out with Mullett in our Hartley/Vey Studio! Enjoy complimentary food by City Group Hospitality and get your hair teased to the rock gods!

Not sure what to wear? Think Sunset Strip back in the '80s. We're talking teased hair, mullets, spandex, heavy eyeliner, animal print, head scarfs, leather, sequins, and shoulder pads - the flashier the better! Go to Time Warp and receive 15% off when you mention the Hair Band Ball. And, YES there will be a costume contest!

-Nothin’ but a good time

For over a decade now, Mullett has proven themselves time and time again to be the premier rockers for Hair Band fanatics and lovers of Rock ‘n’ Roll all over the world. By delivering the best of the 1980s in Big Hair and faithful renditions, Mullett recreates the vibe of those times with unrivaled passion and conviction. Mullett has the unique ability to ROCK and captivate its audience with the sights and sounds of the Glam Band era. Mullett fans agree; this is the closest anyone can get to classic Van Halen, Def Leppard, Bon Jovi, Journey, and Poison without hitting 88 mph in a tricked-out DeLorean.

Event Price: $30.00 plus fees
Additional Information: The Entrance to the Hartley/Vey Studio Theatre is on North Blvd, across from the Old State Capitol.
Website: https://www.manshiptheatre.org/show/hair-band-ball 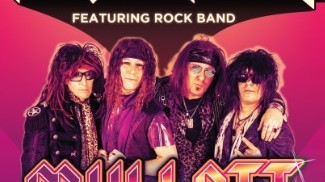