Remembering those who’ve fallen aboard DD-661.

A remembrance ceremony is held on the USS KIDD’s fantail each April 11th, which is the anniversary of the day when a kamikaze aircraft went through the hull of the USS KIDD (DD-661). The ceremony takes place at 1:55 p.m., the exact time that the attack began on April 11, 1945, while off the coast of Okinawa, just south of Japan. The KIDD and her squadron had fought off three aerial raids that day before a fourth raid resulted in the ship being struck on her starboard side by one lone suicide plane. The aircraft first attacked the USS BLACK but the pilot pulled up, skimmed over it, and crashed into the hull of the KIDD. During the attack, 38 crew members were killed and an additional 55 members of the crew were injured.

“According to the ‘The Sacrificial Lambs’ by Bill Sholin, more than 300 vessels were struck by kamikazes at the Battle of Okinawa with over 5,000 sailors lost,” said Ship Superintended Tim NesSmith. “That’s more vessels damaged or lost than in any other single battle in the history of the U.S. Navy. The majority of the ships struck were destroyer type ships like KIDD.” The KIDD Crew will be remembering those onboard the ship on that fateful day. Many of the survivors are now ages 90 and up and are unable to travel great distances to visit their old ship. Many family members now often attend in their stead. 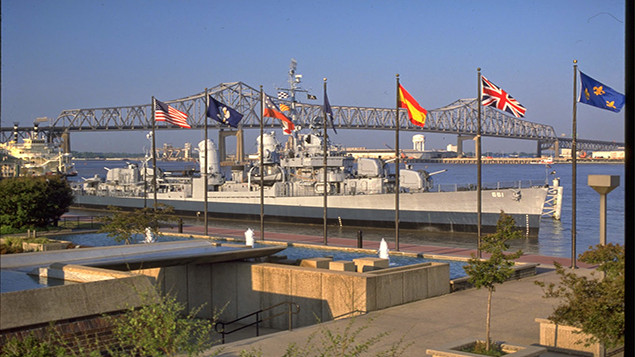