The City of Baton Rouge is hosting the Capital Region Veteran's Parade sponsored by the Mayor-President's Advisory Council on Veteran's Affairs in downtown on Saturday, November 16, 2019.

The parade will run down River Road starting in front of the Pentagon Barracks and ending at the USS Kidd. The parade will honor the service, sacrifices and selflessness of our veterans.

This year’s Grand Marshall will be Warrant Officer Johnnie A. Jones Sr., a 99 year old veteran of the United States Army.

There will be live music by Jonathan Boogie Long, food vendors and cold beverages as well as speakers to include General Russell Honoré and Mayor Sharon Weston-Broome.

“It’s important to thank our veterans for their service and sacrifices. This parade is an excellent opportunity to show our support,” said Mayor Broome.

Entertainment begins at 11:00 AM on the River Plaza Stage adjacent to the USS Kidd Museum with the parade beginning to roll at 12:00 PM. All ages are welcome.

After the parade concludes, speakers will address attendees followed by a finale set from Jonathan Boogie Long.

After the parade festivities conclude, we invite everyone to join us at the River Center for Viewing Party and Tailgate of the LSU vs. Ole Miss game.

If interesting in being a food vendor or setting up a table, contact Heather Day at events@theredcake.com.

All other inquiries can be directed to events@theredcake.com. 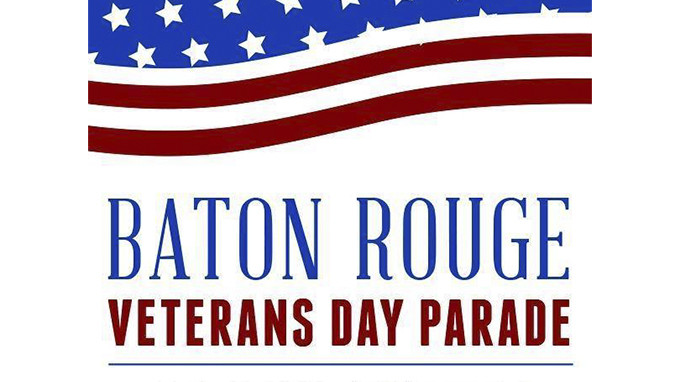