WE NEED OUR SPACE LIVE: ASTROPHOTOGRAPHY with CONNER MATHERNE

Join Irene W. Pennington Planetarium Producer Jay Lamm and astrophotographer Connor Matherne, whose work is on view in our Universe Gallery until August 1, for an episode of We Need Our Space that is all about astrophotography! CLICK HERE to join the livestream; it will also be available on LASM's Facebok and Twitch accounts.

Connor Matherne is an LSU graduate student in the department of Geology and Geophysics who works at the university's Planetary Science Laboratory. He is being considered for 2020 Astrophotographer of the Year by London's Royal Museum Greenwich, which is the largest astrophotography competition in the world. Matherne's astrophotography has been featured by the European Space Agency (ESA), on the websites AstroBin and Amateur Astrophotography, and have been been published in The Astrophotographer's Guidebook. 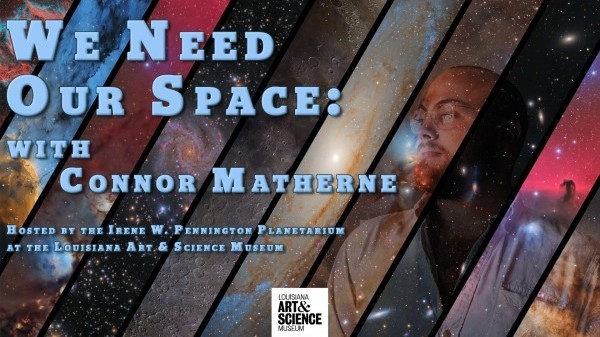