The Louisiana State Museum-Baton Rouge features thematic exhibits on the diverse aspects of Louisiana history and culture, including two permanent exhibitions, entitled Grounds for Greatness: Louisiana and the Nation, and Experiencing Louisiana: Discovering the Soul of America.

“A COLORFUL WORLD IN BLACK AND WHITE: FONVILLE WINANS’ LOUISIANA” ON VIEW AT THE CAPITOL PARK MUSEUM

BATON ROUGE, LA - On July 14, Lieutenant Governor Billy Nungesser and the Louisiana State Museum will unveil a new exhibition, A Colorful World in Black and White: Fonville Winans’ Louisiana, at the Capitol Park Museum in Baton Rouge. Join us between 5:00 and 7:00 p.m. as we celebrate the opening with a free reception with food and libations.

“Louisiana is justly famous for its unique landscapes, its colorful politicians, and its hospitable people,” observed Lieutenant Governor Nungesser, who leads the Louisiana Department of Culture, Recreation, and Tourism, which includes the Office of State Museums. “Fonville’s iconic and beautiful photographs document the past while reflecting the radiance and resiliency of Louisiana culture.”

A gifted, amiable, and inquisitive photographer, Theodore “Fonville” Winans had an intuitive eye for composition and an innate ability to connect with his subjects, revealing both their personality and a sense of place.

Winans drove the backroads and navigated the bayous of south Louisiana during the early 1930s. During his travels, he documented many fascinating aspects of Louisiana culture including the Acadian fishing community of Grand Isle, the Crowley rice festival, an annual fox hunt in Feliciana Parish, the interior of a salt mine on Avery Island, and prisoners at Angola State Penitentiary.

After getting married in 1936, Winans and his bride, Helen Collins, settled in Baton Rouge where he would raise a family and make splendid photographs for half a century. Initially, he worked as a state photographer specializing in portraits of elected officials during the tenure of Governor Earl Long. Then, in 1940, he opened his studio on Laurel Street and became a wedding and portrait photographer, known for the friendly thoroughness of his approach. Generations of Baton Rouge brides selected him to document their special day.

Winans achieved an engaging blend of intimacy and revelation not just in his wedding photographs, but in all of his work. And although color photography became more available and popular during his career, he stuck with the familiarity of black and white. An alert and sensitive chronicler of his times, Fonville Winans created a magnificent and monochromatic record of a colorful and complex culture.

In 1994, the Louisiana State Museum acquired the largest collection of Fonville Winans photographs, along with camera equipment and memorabilia from Robert L. Winans, the photographer’s son, and Natalia, his daughter-in-law. This comprehensive exhibition includes more than 160 of Winans’ photographs of Louisiana bayous, politicians, citizens, celebrities, and brides, several videos about the photographer and his subjects, and photographic equipment from his studio.

A Colorful World in Black and White: Fonville Winans’ Louisiana will be on display at the Capitol Park Museum in downtown Baton Rouge. The museum is located at 660 N. Fourth Street in Baton Rouge and is open between 9:00 a.m. and 4:00 p.m., Tuesday through Saturday. Admission to the museum is $7 for adults, $6 for students, senior citizens, and active military, and free for children six and under. Visit LouisianaStateMuseum.org for more information.

Guests are encouraged to wear masks and hand sanitizer will be provided at the entrance to the museum.

Since the first parade in 1980, Spanish Town Mardi Gras has provided an alternative to more traditional carnival celebrations in Baton Rouge. While other groups may strive for beauty and grandeur, the Spanish Town festivities embrace the bawdy, the irreverent, and the scandalous.

Artifacts and images from the founders of Spanish Town Mardi Gras tell the story of how an informal neighborhood gathering became a city-wide celebration, boasting upwards of seventy-five floats, each accompanied by between thirty and fifty paraders and continuing past these 40 years.

Exhibit viewing with purchase of a museum admission ticket during regular business hours.

Grounds for Greatness: Louisiana and the Nation shows Louisiana’s impact on the nation and the world. From the Louisiana Purchase to the critical role Louisiana played in our nation’s wars (including the Battle of New Orleans in the War of 1812, the Civil War and both World Wars), you will come to understand the scope and importance of the historical contributions of Louisianans. A section on Governor Huey P. Long and jazz pioneer Louis “Satchmo” Armstrong showcases the larger-than-life personalities and accomplishments of two of the state’s most notable residents.

Lastly, slavery and civil rights are explored, with an emphasis on the 1896 landmark U.S. Supreme Court decision of Plessy v. Ferguson, the Louisiana case that upheld the “separate but equal” practices of legal segregation despite the concerted efforts of Homer Plessy and other activists. This section ends with a look at the Baton Rouge bus boycott of 1953 and its role in the modern civil rights movement. Artifacts in Grounds for Greatness include a 42-foot wooden shrimp trawler, a Civil War submarine, a mid-1800s cotton gin and a sugarcane harvester.

The Capitol Park Museum is honored to present the 1966 Cadillac Superior Coach hearse that transported the body of slain civil rights leader Martin Luther King Jr. after his assassination in Memphis on April 4, 1968. The hearse carried King’s body from the hospital to the funeral home and then from the funeral home to the Memphis airport where it was received by his widow, Coretta Scott King. King’s body was flown to Atlanta where he was eventually laid to rest.

The hearse will be on display in conjunction with the exhibition Carrying on the Dream .

Visitors can learn more about the history of the civil rights movement in Louisiana in the permanent exhibition, Grounds for Greatness: Louisiana and the Nation, which is located on the museum’s first floor. Part this exhibition focuses on the Baton Rouge bus boycott of 1953, which King saw as a model for the Montgomery Bus Boycott that he helped organized in 1955.

School groups are welcomed and reservations are required. To make a reservation, call (225) 342-5414. 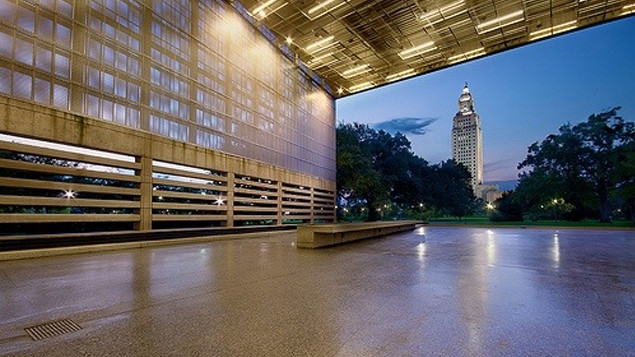