Traveling to more than 137 countries, Buffett turned his camera lens on the powerful forces that fuel hunger and poverty now shown in 40 Chances: Finding Hope in a Hungry World. Buffett, son of the legendary investor Warren Buffett, was challenged by his father: if you had the resources to accomplish something great in the world, what would you do? The result is the younger Buffett’s book 40 Chances: Finding Hope in a Hungry World and his campaign to bring awareness to the issue of global hunger.

A philanthropist and farmer, Buffett believes that each of us has about 40 chances to accomplish our life goals, just as farmers have about 40 growing seasons to improve their harvests. His photography is a call to action to find lasting solutions to the world hunger crisis.

The exhibit also includes an original Newseum film featuring Buffett and his work, and a tactile display that reveals the leading causes of death worldwide. Visitors can use a touch-screen kiosk highlighting five organizations working on solutions to world hunger and conflict to learn how they can be a part of Buffett’s 40 Chances campaign.

Beginning with his love for farming, the exhibit chronicles his travels around the world as he seeks out new approaches to ease the suffering of so many. It is told in a unique format: 40 stories provide readers a compelling look at Howard’s lessons learned, ranging from his own backyard to some of the most difficult and dangerous places on Earth.

40 Chances: Finding Hope in a Hungry World was developed by the Newseum in collaboration with Howard G. Buffett Foundation The Newseum is an affiliate of the Freedom Forum, whose mission is to foster First Amendment freedoms for all. 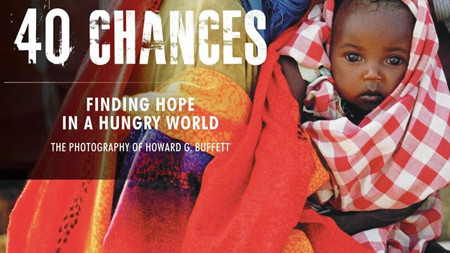