Veterans and community members are invited to the USS KIDD Veterans Museum’s Pearl Harbor Remembrance Ceremony on Tuesday, December 7. The observance will be held aboard USS KIDD beginning at 11:55 a.m. This event is free and open to the public. The program is hosted by USS KIDD staff and volunteers. Music will be provided by the Marine Forces Reserve Band from New Orleans.

Among the guests at the service will be several Sailors from the active-duty USS KIDD DDG-100. Commanding Officer CDR Matt Noland, a Baton Rouge native, plus three of his crew, Chief Petty Officer Cameron Cauthen, Logistics Specialist Seaman Richard McClain, and Boatswain's Mate Seaman Basilo Hernandez will be aboard for this special occasion.

Immediately following the Pearl Harbor Day service, there will be a memorial ceremony ashore for a more recent tragic event. The Coast Guard buoy tender WHITE ALDER was lost in a collision on the Mississippi River near White Castle on December 7, 1968. Members of the USCG Marine Safety Unit Baton Rouge will honor the 17 crew that went down with their ship. Like the crew of the ARIZONA, the WHITE ALDER’s crew is entombed aboard their ship on the river’s bottom.

The USS KIDD Veterans Museum will be open from 9:30 a.m. to 3:30 p.m. on Tuesday. Admission is charged. The Pearl Harbor Remembrance Ceremony will begin at 11:55 a.m. aboard USS KIDD with the USCGC WHITE ALDER ceremony following immediately afterward at the WHITE ALDER Memorial. Both services are open to the public at no charge. 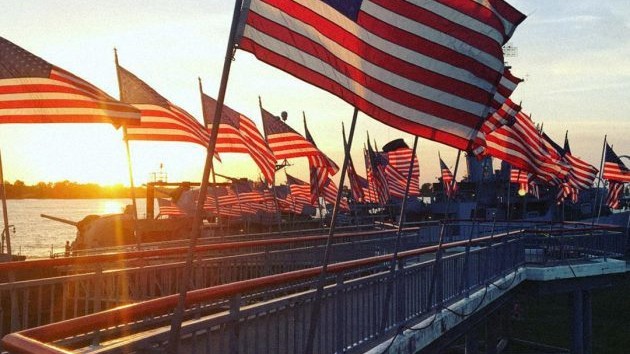