“Wheels of War” provides a brief history of wartime railroads from the Civil War through World War II. The railroad and the military have been connected since the early days of railroading; from the Civil War to both World Wars, Union Pacific has been an integral part of national defense. “Wheels of War” highlights the military’s need for a consistently dependable and fast railroad, and the steps the railroad took to meet that demand.

As an addition to the travelling exhibit, USS KIDD Veterans Museum will highlight the history of the Camp Claiborne – Camp Polk military railroad in Central Louisiana. Construction of this railroad began in 1941, before the United States officially entered World War II, and was completed in July 1942. The railroad was used to train Army Railroad Operating Battalions, as well as Engineering Battalions. Also, it was used for experiments to determine the means necessary to derail enemy trains.

The Union Pacific Railroad Museum, located in Council Bluffs, Iowa, strives to share American History through the lens of the railroad; connecting generations who have been impacted by Union Pacific.

Event Price: Admission to “Wheels of War” is included with admission to the Museum
Website: https://www.usskidd.com/ 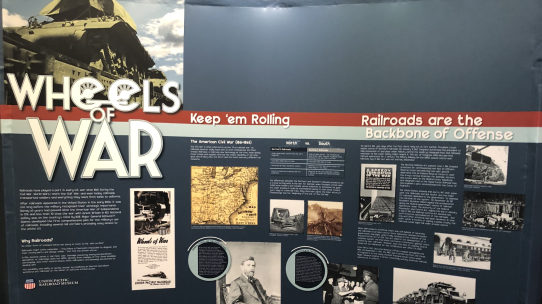