On July 14, Lieutenant Governor Billy Nungesser and the Louisiana State Museum will unveil a new exhibition, A Colorful World in Black and White: Fonville Winans’ Louisiana, at the Capitol Park Museum in Baton Rouge. Join us between 5:00 and 7:00 p.m. as we celebrate the opening with a free reception with food and libations.

“Louisiana is justly famous for its unique landscapes, its colorful politicians, and its hospitable people,” observed Lieutenant Governor Nungesser, who leads the Louisiana Department of Culture, Recreation, and Tourism, which includes the Office of State Museums. “Fonville’s iconic and beautiful photographs document the past while reflecting the radiance and resiliency of Louisiana culture.”

A gifted, amiable, and inquisitive photographer, Theodore “Fonville” Winans had an intuitive eye for composition and an innate ability to connect with his subjects, revealing both their personality and a sense of place.

Winans drove the backroads and navigated the bayous of south Louisiana during the early 1930s. During his travels, he documented many fascinating aspects of Louisiana culture including the Acadian fishing community of Grand Isle, the Crowley rice festival, an annual fox hunt in Feliciana Parish, the interior of a salt mine on Avery Island, and prisoners at Angola State Penitentiary.

After getting married in 1936, Winans and his bride, Helen Collins, settled in Baton Rouge where he would raise a family and make splendid photographs for half a century. Initially, he worked as a state photographer specializing in portraits of elected officials during the tenure of Governor Earl Long. Then, in1940, he opened his studio on Laurel Street and became a wedding and portrait photographer, known for the friendly thoroughness of his approach. Generations of Baton Rouge brides selected him to document their special day.

Winans achieved an engaging blend of intimacy and revelation not just in his wedding photographs, but in all of his work. And although color photography became more available and popular during his career, he stuck with the familiarity of black and white. An alert and sensitive chronicler of his times, Fonville Winans created a magnificent and monochromatic record of a colorful and complex culture.

In 1994, the Louisiana State Museum acquired the largest collection of Fonville Winans photographs, along with camera equipment and memorabilia from Robert L. Winans, the photographer’s son, and Natalia, his daughter-in-law. This comprehensive exhibition includes more than 160 of Winans’ photographs of Louisiana bayous, politicians, citizens, celebrities, and brides, several videos about the photographer and his subjects, and photographic equipment from his studio.

A Colorful World in Black and White: Fonville Winans’ Louisiana will be on display at the Capitol Park Museum in downtown Baton Rouge. The museum is located at 660 N. Fourth Street in Baton Rouge and is open between 9:00 a.m. and 4:00 p.m., Tuesday through Saturday. Admission to the museum is $7 for adults, $6 for students, senior citizens, and active military, and free for children six and under. Visit LouisianaStateMuseum.org for more information.

Guests are encouraged to wear masks and hand sanitizer will be provided at the entrance to the museum. 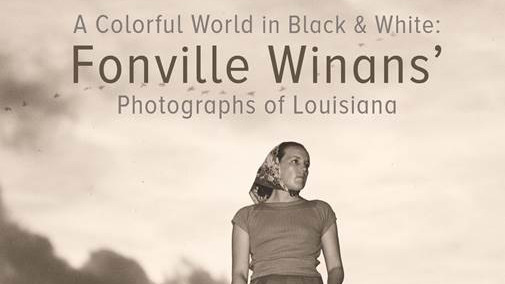